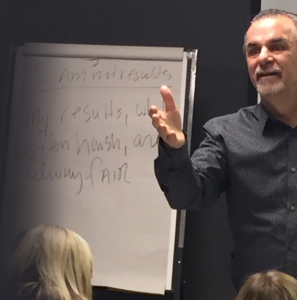 Rick Geha began his real estate career at the ripe old age of 22 while finishing a degree in Biology at Cal State Hayward and working in his family’s restaurant. By 1987, he had jumped in full-time and soon became the #1 agent at a local agency named Good Real Estate. By 1993, his passion quickly evolved to influence and leadership earning Rick a leadership position with Contempo Realty. By 1997, he had grown his team to include about 50 agents while still remaining a top producer, himself. That same year, the chain was bought by Cendant and, just two years later, Rick’s office was named the #2 Century 21 Office in the World for sales volume (from among 7,500 offices worldwide). That achievement was repeated again in 2000. In 2001, Rick’s saw an opportunity to expand his influence and the difference he was making with agents that led him to join Keller Williams Realty. He continued to produce superior team results while building a successful career as a speaker, trainer and coach.

Rick left KW in 2015 to pursue speaking and coaching at the highest level. While he still sells real estate with his team “The Rick Geha Real Estate Team” in Northern CA, he is most proud of his speaking company” The Freedom Pathfinder ” and his affiliation with Workman Success Systems. For nearly three decades, Rick’s led more than 1,000 classes and workshops guiding real estate companies and teams to superior agent attraction, agent recruiting, agent retention, and systems surrounding all 3 throughout the U.S. and Canada. He is also a Master Coach with Workman Success Systems. Most of Rick’s coaching clients are top producing Teams, and in most cases, they also own real estate offices or franchises. He’s produced a daily inspirational video blog and presented keynote addresses to thousands of of professionals from all industries and walks of life.

``I want to make the most amount of difference in the lives of EVERY person I come in contact with from now until I die, FOR THE BETTER``